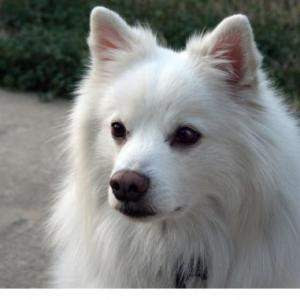 The first Eskies were born in the United States because of its German origin, were known as German Spitz. This name did not last long because, during the First World War, Americans (at enmity with the Germans) wanted to emphasize his patriotism and renamed American Spitz. In 1917 the name changed again by the current (American Eskimo). The curious thing about this new name is that, despite the meaning (in English means eskimo Eskimo), race has no connection with that people.
Origin

The American Eskimo (Eskie) descended from the Spitz from northern Europe. During the nineteenth century in America, we selected specimens of different races white Spitz who had been brought by German settlers. The outcome of these crosses was born the present race, spread throughout the country thanks to Barnum and Bailey Circus, which used these dogs in their numbers.

The Eskie is affectionate, playful, a little dominant and independent. He enjoys spending time with their owners and they get attention. When you want (sometimes a bit stubborn), likes to please and learn easily. It is a very active dog who loves the snow and cold. Is suspicious of strangers, does not change their minds until their owners are indicated. Is prone to barking.
Appearance

There are three different sizes for the American Eskimo: the standard is between 38 and 48 cm, Miniature between 30 and 38 cm and under 30 cm Toy. They all have a strong and compact body. The head is triangular, pointed snouts and brown eyes and oval. Their ears are triangular and erect. The tail is screwed over the loin. The body is covered with a white coat, smooth and thick.

The Eskie needs to be educated with patience and firmness from puppyhood, you should see the dog training as a game. The adolescent male may try to dominate the owner.
Although it is an independent dog, you should take time, if you may become bored and hipernervioso barking. Games and long walks are exercises that will make it a healthy dog ​​both physically and mentally.
Its thick coat needs to brush it once a week, a little more in times of change.

The American Eskimo specimens are prone to cryptorchid, monorchid, weak joints, hypoglycemia (in Toy) and malformation of the skull (open skull at birth).